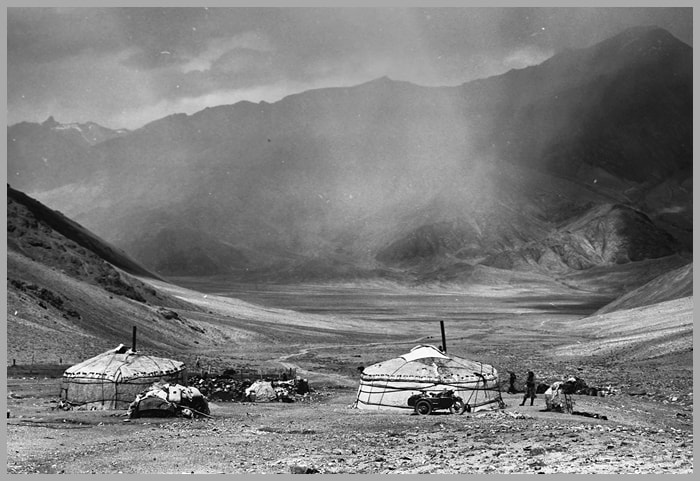 Day 1: Almaty
We are glad to present the tour along Silk Road. We will visit the central part of Almaty. Begin from the Southern capital of Kazakhstan and see breathtaking attractions. We will visit Green Bazaar as one of the most famous bazaars in Kazakhstan. Upon arrival you can see national goods and oriental sweets. We will visit the oldest Almaty parks as Panfilov Park, Zenkov Cathedral. Walk to Memorial of Glory and Eternal Flame built for retention of the battalions who deceased for freedom of Kazakhstan. In the afternoon we will visit Medeo Gorge. It is the uppermost mountain skating rink in the world. We will drive to Kok Tobe hill and see the biggest TV tower in the world. The tour will end by having a ride from the top of the hill to the center of the city by the renowned Almaty cableway. Overnight is in a hotel.

Day 2: Almaty - Issyk - Almaty
In the morning we will drive to Trans Ili Alatau as Issyk Gorge. It is located alongside the Kuldja tract. Everyone will have an opportunity to see astonishing beauty of nature and take magnificent photos. See burial mound of Saka period, where the prominent "Golden Man" was found. Today it became the national symbol of Kazakhstan. We will visit the State Historical and Cultural Museum Reserve "ISSYK" made to the antiquity and art, music, and literature of the Saka period and a copy of Golden Man and golden items, ancient ceramics, weapon, elements of horse equipment, as well as the model of Saka burial mound. Drive to an altitude of 1756 meters above sea level and see remaining mountain lake Issyk. It emerged about 10,000 years ago due to earthquake of 300 meters in height. Afterwards is transfer to a hotel.

Day 3: Almaty - Bishkek
You will be met by the driver who accompanies you to Bishkek. Bishkek city is the capital as well as the biggest city of Kyrgyzstan and placed at about 800 meters (2,600 ft) altitude near the northern range of the Kyrgyz Ala Too range. It is a part of the Tian Shan mountains of about 4,855 meters (15,928 ft). There is a lovely view from the range. Guests will have a city tour where you can visit the Pobeda Square (Victory Square), Duboviy Park (Oak Park), Central Ala Too Square, the National Arts Museum, National Philharmonic and so on. Overnight is in a hotel.

Day 4: Bishkek - Burana - Issyk Kul northern shore
Our wonderful morning will start by travelling to Issyk Kul Lake. It is enclosed by the celestial mountains. Also, it is the second largest alpine lake in the world of 1608 m above sea level. The lake is also called "the pearl of Central Asia". This lake is never freeze because it has salt at the bottom. On the way to the lake you can visit Burana Tower and an outside museum of Balbals (stone warriors). This complex was discovered in the 11th century. Night is in a hotel.

Day 5: Issyk Kul Lake - Karakol
Be ready at 8 o'clock and then travel to Karakol city. On the route have stop and visit ancient stone inscriptions belonging to the 800 B.C. It is worth noting that petroglyphs were made by magicians more than 2 000 years ago. We will drive lengthwise the northern shore of the lake to the town of Karakol. See the Dungan mosque built without any pins and famed among travelers. See an old wooden Orthodox Church. Overnight is in a guesthouse.

Day 6: Karakol - Jeti Oguz - Issyk Kul southern shore - Bishkek
Guests will drive to Jeti Oguz gorge or Seven Bulls. Travelers will find seven rocks sited in a row and have diverse shapes. On the way you will have the chance to see the Broken Heart Mountain. Plunge to the beautiful panorama view if you spend 20 minutes. After that you will have a stop in Bokonbaeva village. Meet a local trainer who hunts hares and foxes with the help of eagles. Transfer to Bishkek city. Overnight is in a hotel.

Day 7: Bishkek - Osh - Guliston - Khudjand
Today is a flight to the city of Osh in the morning. Visit a famous and special place as Suleiman Mountain. Suleiman Too or Solomon's Mountain is situated in the city center. It is a pilgrimage place for local Muslims. According to the legend, prophet Solomon was repressed at the foot of it. Then we will drive to Tajik border over mountains and high passes. We will drive via Batken region. On the way we will pass by apricot trees and flower - Aigul. Tajik guide will meet you at the other side and drive to Khujand city. It is the second largest city of Tajikistan and placed on the Syr Darya River at the mouth of the Fergana Valley. The population of the city is 149,000. In addition, it is the capital of the northernmost province of Tajikistan, called Sughd. In the second half of day you will visit the Cultural Palace of Khujand where the first president of Tajikistan was selected as well as Central Mosque. Overnight is in a hotel.

Day 8: Khudjand - Iskanderkul Lake
Travel to high Mountain lake - Iskanderkul of 2 255 m. a. s. l situated in Fann Mountains. This superb place is well-thought-out to be the best places of Central Asia. On arrival you will walk along beaches and take a lot of vibrant photos. On the way we will hike 40 minutes and see outstanding waterfall. It is important to note that Tajikistan is the second place amongst the CIS countries for capacity of water resources. It is the highest water reserves of all Central Asian countries. See more than 1 000 rivers, 2 000 lakes and 8000 glaciers. Overnight is in a home stay.

Day 9: Iskanderkul Lake - Penjakent
Drive to Penjakent thru pass Shahriston. The height is about 3 378 m. The pleasing city of Penjakent is also called "five villages" and located in Khujand area of Tajikistan in a fascinating Zeravshan river valley. The five villages developed in the 5th -8th centuries AD. Penjikent was one of the most important cultural and crafts centers of Sogd or "Central Asian Pompeii". It was a ruler's palace, where two temples, markets, dwelling houses were ornamented with paintings, wooden and clay statues of ancient gods. Remnants were found only in the last century. Today explorers will have the opportunity to see the remains of dwelling houses and office buildings, the citadel with the palace, the house of craftsmen, and fire worshiper's church. Night is in a local hotel.

Day 10: Penjakent - Jartepo - Samarkand
In the morning we will transfer to the Tajik-Uzbek border. he Uzbek driver will meet you at the other side of the border and transfer to Samarkand. Night is in a hotel.

Day 11: Samarkand
In the morning we will have a city tour in Samarkand. The magnificent city of Samarkand is located in the valley of the river Zerafshan and reflected to be the second largest city of Uzbekistan like Babylon or Rome. Start your city tour and visit Registan square, Shakhi Zindeh, Mausoleum Guri Emir and Bibi Khanum Mosque. Registan Square is one of the most visited places amid travelers. Travelers will see madrasahs of the 15th - 17th centuries. Shakhi Zindeh is famous for its main collection of mausoleums of the 11th-15th centuries. It is included to UNESCO World Heritage Site. Bibi Khanum Mosque is an attractive site built for the adored Tamerlane's wife. Overnight is in a hotel.

Day 12: Samarkand - Bukhara
Today is transfer to Bukhara by train in the morning. City tour. We will visit citadel in Bukhara found in the 4th century - Citadel Ark. It comprised several dynasties of Bukhara Empire. Afterwards you can visit Samanids mausoleum found in the 9th-10th century. The next target is the Chashma Ayub or Job's well and Bolo Hauz mosque. The place is built in honor of Bukhara governor Abu Fayud Khan. Walk across the city and buy gifts form souvenir shops. The tour will be continued to one of the most famous madrasahs of Bukhara - Nodir Divan Begi. It became a part of Lyabi House Ensemble. Then visit the Kalon complex. It is very well-known art of Bukhara. See three structures built in the 12th - 16th centuries as Kalon minaret, Kalon mosque and Mir Arab Madrasah. Rest is in a hotel.

Day 13: Bukhara - Farab - Turkmenabad - Mary - Merv
The local guide will meet you at Alat - Farap border point. After rest we will drive to Mary province. Also, we will visit an Ancient Merv which is situated at the road crossing of the Great Silk Road. It is one of the biggest cities of the ancient world as well as the most important capitals of Islam beside with Baghdad, Cairo and Damascus. Have a guided city tour and visit Gyz Gala, Erk Gala, Soltan Gala, Soltan Sanjar Mausoleum, Ibn Zeid Mausoleum. Night is in a hotel.

Day 14: Mary - Ashgabat
In the morning you will transfer to Ashgabat. On the way see Annau Seyitjemaleddin Mosque. Then a ruin town as Abiverd, located in eight kilometers west of Kaka. Abiverd was one of the most significant trading towns of Khorasan. We will arrive to Ashgabat and then drive to Gypchak village in order to see mausoleum and mosque. The next destination is Old Nissa - The Sanctuary of Parthian Kings. Nisa was the capital of Parthian Empire for 600 years as well as was the opponent of Rome Empire. Visit Monuments of Archabil boulevard and learn more about new part of Ashgabat as Health Path of Turkmenbashy built on mountains, Monument of Constitution "Alem" Culture and Recreation Center. In the afternoon we will drive to a hotel and check in. Afterwards you can walk to Park dedicated to Turkmen horses-the pride of Turkmen, Gulistan Bazar, Monument for the Victims of the Earthquake of 1948, Monument of Lenin, Ertogrul Gazy Mosque. In the end of day guests will have night city and see the main streets of Ashgabat including the Palace of Happiness. Night is in a hotel.

Day 15: Ashgabat
Continue the tour in Ashgabat city. Upon arrival visit "Altyn Asyr" Oriental Bazar - Jygyldyk bazaar! It is one of the main bazaars in Central Asia where you will find anything you want.  We will visit Horse Farm and see sturdy Turkmen Horses - Akhal Teke. Later on, you can visit the National Museum of History as one of the largest museums in Central Asia. Then we will drive to Arch of Neutrality. There is a famous rocket and tripod style built which represent neutral status of Turkmenistan. Its height is over 300 feet including 40 feet revolving statue of first President of Turkmenistan: Saparmyrat Nyyazow (Turkmenbashy). Then you will have the venture to walk around the Park of Independency where you can see fountains and statutes as well as Monuments of Independency and Ruhnama. Night is in a hotel.

Day 16: Flight
Morning transfer to airport. Have a safe flight! Thank you.

Entrance fees in UZ* (with escort guide only) - $35 per group