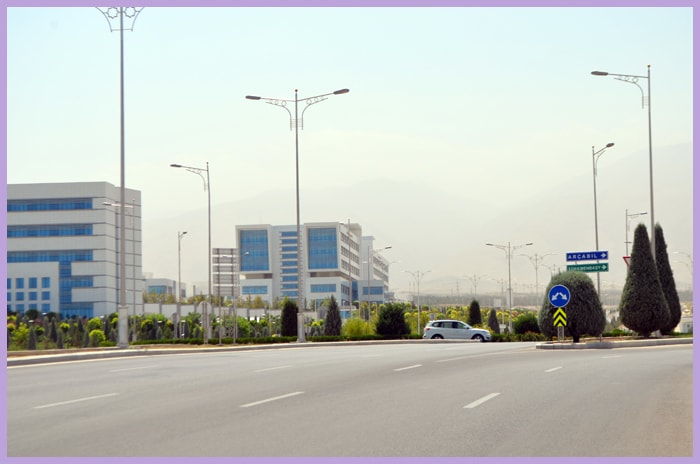 Day 1: Ashgabat
The guide will meet you at the airport and transfer to Ashgabat city. First to all we will visit "Nisa" (UNESCO World Heritage since 2007). It is located in 18 km to the west from Ashgabat and oversee the wrecks of Nisa, the capital of ancient Parthia. In the III century BC New Nisa was the capital of Parthia and the Old Nisa fortress was a majestic house at that time. The next purpose is Ertugrul Gazi mosque. It is adorned with four snow-white minarets, and is alike in look to the well-known Blue Mosque, situated in Istanbul. The scheme of the Azadi Mosque is made in old-time Islamic and Byzantine style. Then we will continue your way to the Gypjak, Ruhy mosque. It means "the mosque of Turkmenbashi spirituality" or "the mosque of spirit of Turkmenbashi". Incidentally the mosque is located in Gypjak in the Turkmenbashi native village and enclosed by 4 minarets. The height of the mosque is 55 m, and that of the minarets is 91 m to represent the year 1991 - when Turkmenistan increased freedom. The structure is reachable across 9 entries with arcs. Transfer to a hotel for sleep.

Day 2: Ashgabat - Turkmenabad
Today we will visit feudal mosque Seyit Jemaletdin, made in the XV century, but was destroyed due to Ashgabat earthquake, but later on it was rebuilt. The mosque frontage is incised with a writing saying that this structure was established under Abul Kasim Babur, Temurid prince who was ruling in Khorasan (1447- 1457). The main gateway arch is ornamented with records of tremendous dragons. We will visit Abiverd, the antique settlement of Turkmenistan lengthways with Kunya Urgench, Nissa, Merv, Dakhistan and so on. At that time Abiverd was an unassailable fortress defensive the citizens from the doses of nomads. The stronghold had the only gate from the southwest. Inside, in the center, after to the square there was a mosque created in the early 15th century. Guests will visit Merv as one of the most ancient territories of Central Asia that announced irrigation system among the first. It led to the construction of one of the largest cities of ancient world as Merv (Margush, Margiana, Mary). The raconteurs widely used bright appellations specifying it "a soul of a king, a mother of Khurasan cities, and, the city that helds the Universe. Omar Khayyam, As Samani, Imamaddin Isphakhani and other great philosophers of the Middle Ages. In the end of day is transfer to Turkmenabad. Night is in a hotel.

Day 3: Turkmenabad - Astana baba - Kerki village - Turkmenabad
We are happy to present the next day of seeing Repetek biosphere reserve with its museum and Astana mausoleum. The mausoleum is a part of the memorial complex containing of a mosque and a tomb. Find out several buildings constructed in various periods. They stay so diligently to each other that it is hard to visualize the original shape of the construction. The mausoleum of Astana baba is a 11th - 12th-century monument of architecture. It is the place of "zyuarat" - a unvarying ritual of adoring of holy men detected by visiting pilgrims. Astana baba is still unknown for its origin, but healing. Night is in a hotel.

Day 4: Turkmenabad - Mary - Merv
We are glad to present the next day of visiting Merv, Merv oasis. It will take 40 km from Mary. Generally, it is one of the earliest territories of Central Asia presented irrigation system amid the first. It led to the creation of one of the largest cities of ancient world - Merv so called Margush, Margiana and Mary. The origin of Merv is covered in ambiguities. One fact is recognized for sure, however the first written orientations to this city were found in Avestian records of about the 8-6th centuries B.C. The reporters widely used bright descriptions identifying it "a soul of a king, a mother of Khurasan cities, and, the city that held the Universe. Omar Khayyam, As Samani, Imamaddin Isphakhani and other great philosophers of the Middle Ages existed there. Then we will visit Soltan Sanjar mausoleum, Erk gala, Gawur gala, Soltan gala, Kichi vs Uly Gyz Gala and so on. Night is in a hotel.

Day 5: Mary - Ashgabat - Darwaza
Today we will drive to Ashgabat. On the way we will drive to Darwaza. The Darvaza gas crater is also known as "The Gates of Hell" and can be seen for miles around. The Gates of Hell crater was made in 1971 when a Soviet training rigout inadvertently perforated into an enormous secretive natural gas cave, instigating the ground to breakdown and the whole training rigout to fall in. When they stabbed a pocket of gas, venomous smokes began dripping at a shocking rate. Miraculously, despite the crater's menacing name and ubiquitous blazes, people still trek into the desert to bystander the site in all its intense magnificence. Nowadays it attracts many tourists from around the world. Rest.

Day 6: Darwaza - Ashgabat
The morning will start by driving back to Ashgabat. Guests will visit water and mud crater as well as Yerbent village. In the evening you will have a city tour in Ashgabat. Transfer to a hotel for rest.

Day 7: Flight
The driver will transfer to the airport.

Note: Each Traveler should have 2 photos (5×6) to be presented at the points of entry.